The old colonial city of Merida was our second stop in Mexico – a lovely little town lined with cobblestone streets, leafy trees and an easygoing feeling amongst the locals. We stayed here for just under a week and had a great time going to Spanish school, trying Mexican street food for the first time and hanging out with some new friends we made at one of the coolest hostels of our trip so far, Nomadas.

There is loads of history in Merida and plenty of museums, galleries and churches to visit. We joined a free guided tour on our first morning here (9:30am at the City Town Hall) and got the low-down on T’ho – the ancient Maya site the town is built on meaning ‘city of five hills’, the impact of the Spanish conquest, and the original Mayan pyramid stones used in the construction of Merida’s main cathedral and other landmark buildings. Even though we only walked around the main square for two hours, we still got some good insight into the history and main landmarks of Merida. Our first three days in Merida were spent exploring the town by morning and going to school in the afternoons from 2:30pm-6:30pm. Our evenings were spent trying new places for dinner and having drinks around the pool before heading out for shots of mezcal (a liquor made from agave that you sip, not skull!) with some new friends that we made at the hostel we stayed at: Nathan (Melbourne), Mark (Brisbane), Henry (Los Angeles), Robin (the U.K.) and Daniel (Sydney).

One of the first things we tried at the suggestion of Nathan and Mark was a Yucatan specialty called a ‘torta’ – basically salsa and chicken/beef/pork in a baguette style bread roll. Quite the delicious lunch snack especially with our all-time favourite salsa picante (of the green habanero variety complete with habanero seeds, lime juice, tomato, onion) drizzled on top.

The best tacos we had were at La Reina Itzalana, a corner restaurant near a small square outside the cinema with red plastic tablecloths and white plastic chairs, that Augustine and Rachel from our Spanish school recommended to us. These tacos were cooked on a grill which gave the soft tortillas a crisp edge and the chicken/steak a delicious charred BBQ flavour… and they had the green salsa picante :) Not sure if it was just our over-zealousness for spicy food or something in a torta we got another night from a dodgy-looking cart on the side of the road (the police pulled up to buy one so we figured it had to be good)… but we went crazy with the salsa picante during our first few days in Merida and we can let you know now that it probably wasn’t the best thing for our stomachs :(

Alice still maintains it was the second serving of this street torta that got her (the first one was amazing, so good in fact that we ordered another as soon as we had finished it). The second torta however was nowhere near as appetising especially when we realised they had served us *user discretion advised* entrails and a bunch of other random things we can’t repeat!! *cringe* To help us forget, here is a photo of the first torta, the delicious one, and we can both pretend we stopped at one. 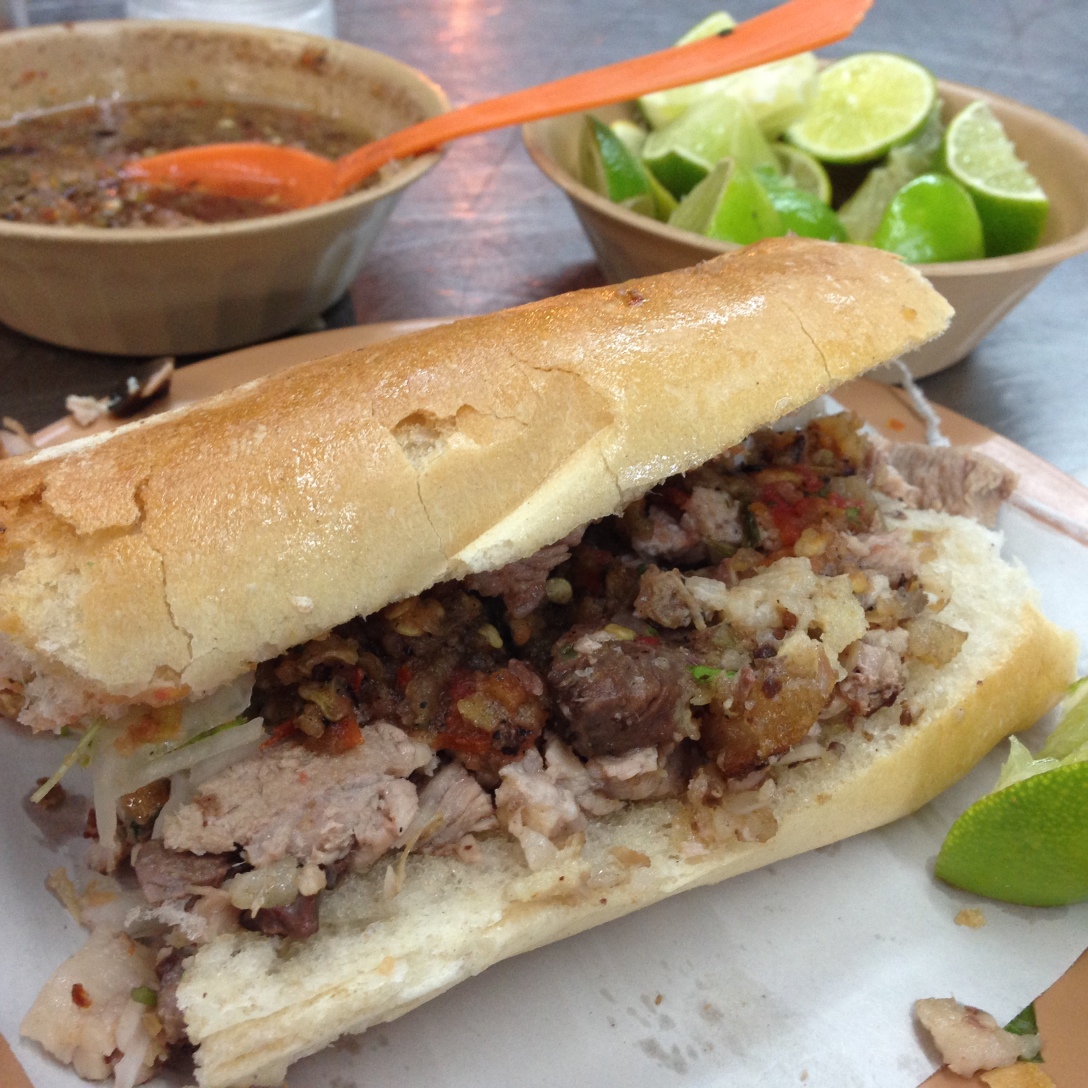 Despite the couple of days it took for us to get back to normal, we still high-five every time we see green salsa picante as it is hands down the best hot sauce to have with Mexican food (and seemingly in small supply outside of the Yucatan).

Outside of food, we loved our time studying at Calle 55 – the teachers spoke only Spanish to us even during the tea breaks which really pushed us to listen and talk in our newly adopted language. It was hard at times but lucky for us, we both love a good game of charades so that helped us out a lot! Having just us two in the class also made for some entertaining conversations in Spanish about who should buy whom bananas and other funny stories. Thank you to Eva, Augustine and Rachel for a wonderful introduction to Spanish. You’ll be happy to hear that we’ve been practicing along the way as much as we can :) 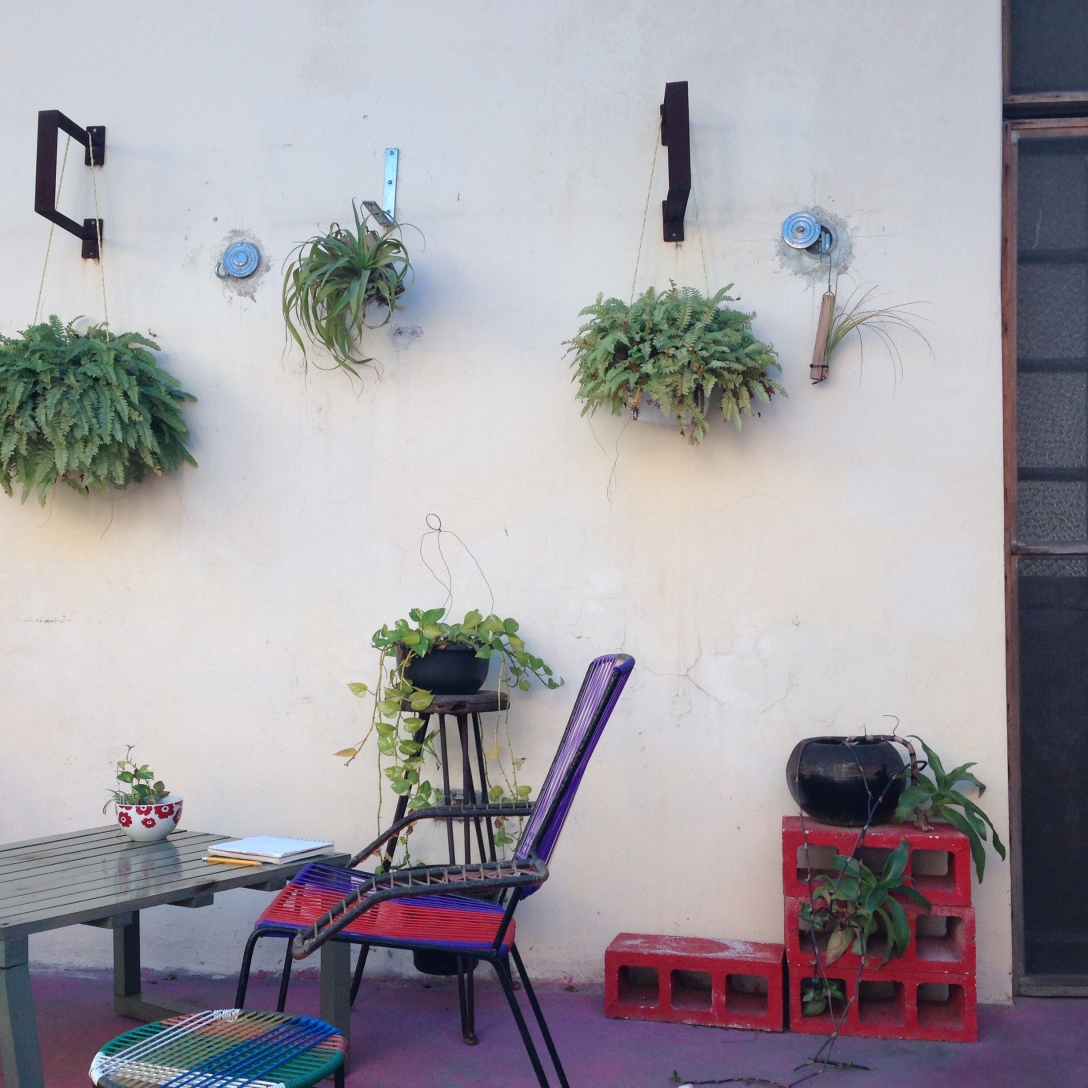 And last but not least, a special shout-out to Nomadas Hostel – our stay there was awesome. We had a private room on the second floor right on the corner, overlooking the pool/garden with a queen bed (plus spare bed) and rainshower. It was perfect! We loved walking out onto the balcony and down the wooden staircase each morning looking out to the sun-dappled pool and banana leaf trees, and it was far away enough from the main area that it was super quiet in the evenings even if people were chatting around the pool. 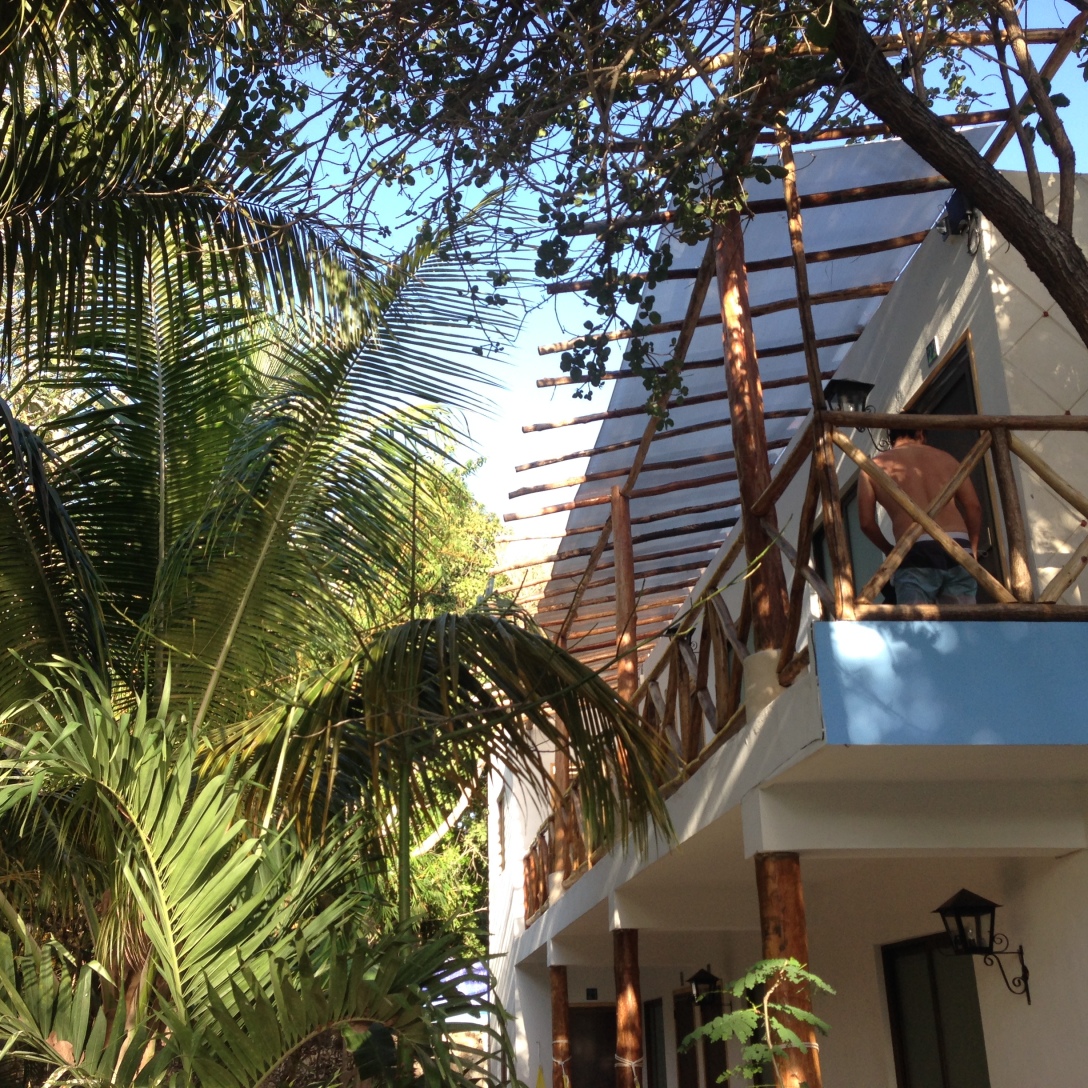 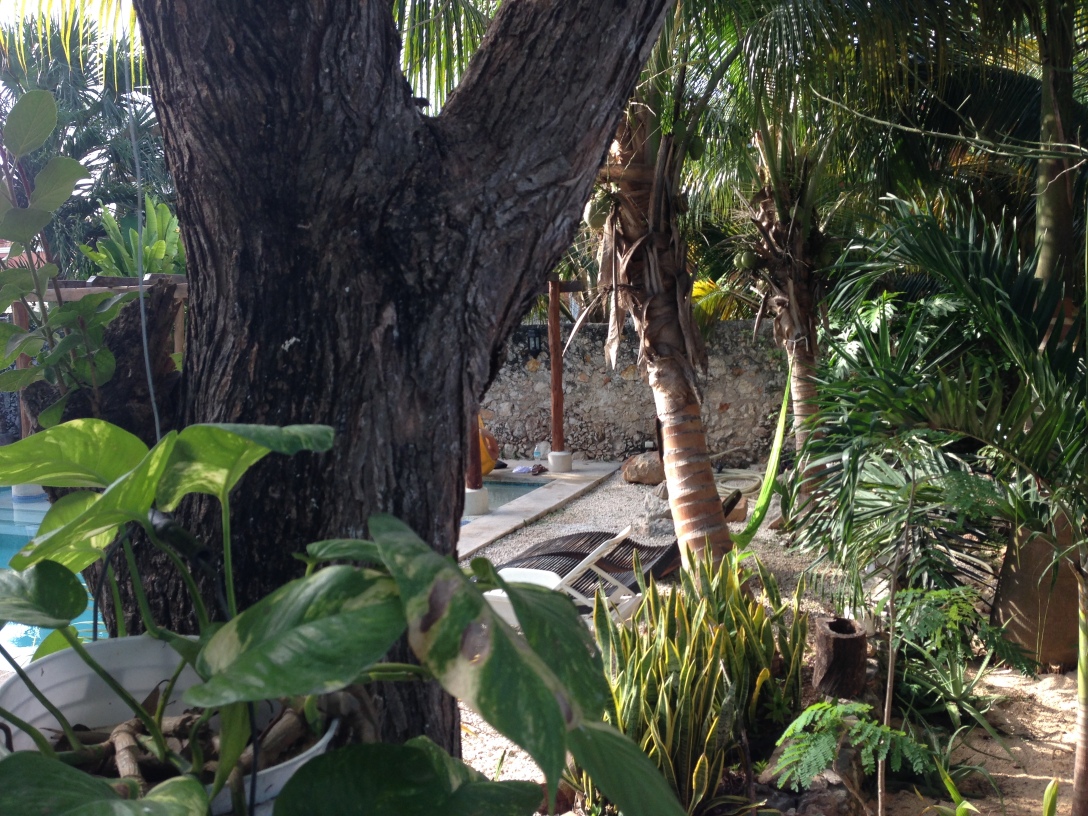 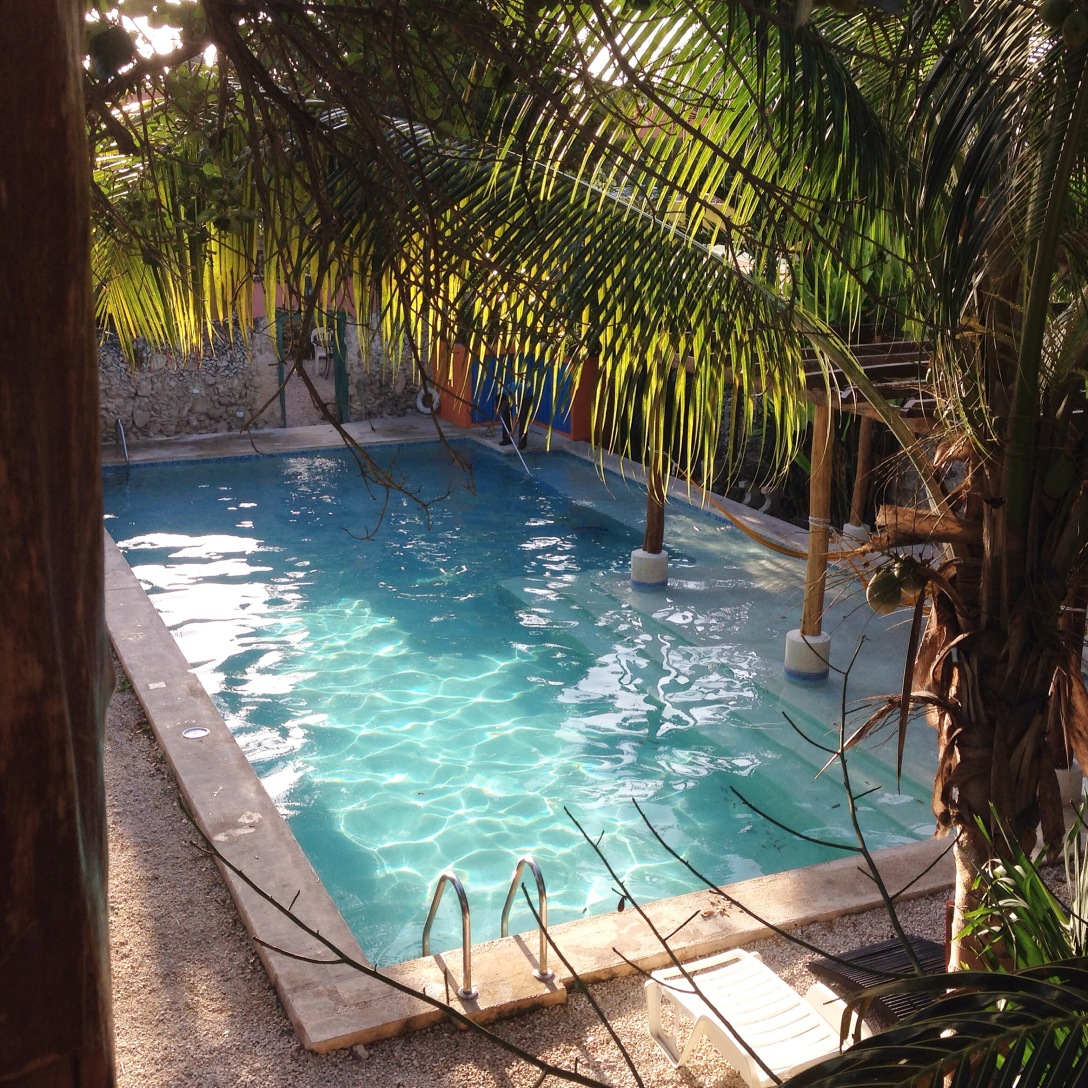 The guys who run the place were super friendly and even helped us transport a Lonely Planet book from Merida to Isla Holbox for us via another Nomadas guest after we’d left so we wouldn’t need to organise a courier. Thanks guys, it’s people like you who make the small things count when on holiday :)

Be honest, how much Spanish did you actually learn in 3 days? Enough to introduce ourselves, make small talk and form simple sentences in present tense (and only present tense!) Even though we can only converse in present tense at the moment, that grammar has definitely taken us a long way already as it means we can create semi-meaningful sentences as long as we know what things are called! What we really need now is to boost our vocabulary so we can have more interesting conversations with people outside of where we’re from, where we’re travelling from/to, what we do back home and how old we are! Oh and also the standard responses to food and scenery such as: Mi gusta! (I like) Muy bonito! (very beautiful) Muy delicioso! (very delicious).

Scenario: You and Tobi are in a Spanish writing and speaking game show and have to work as a team. Who would be the writer and who would be the speaker? Hmm… Tobi has definitely displayed a strength for memorising the grammar for me/you/him/her/they as well as the words for who/what/when/where, which I think comes from his past life as an Italian stallion (at uni). Whereas I am a bit more animated with my speaking so even if I say the wrong thing hopefully the other person would be able to get the jist of it anyway…? So Tobi would be writer and I would be speaker.

Best food you had in Merida? The chicken tacos outside the cinema – just delicious! That was also day one back on proper food for me, so my appetite and senses were at an all-time high.

Be honest, how much Spanish did you actually learn in 3 days? More than I thought, but still not a huge amount. It gave us a great base and can talk about anything in the present tense (as long as we have a dictionary in tow). Next step will be to memorise a whole lot of vocab and eventually use some other grammar structures so that we can do things like talk in the past tense…

Scenario: You and Alice are in a Spanish writing and speaking game show and have to work as a team. Who would be the writer and who would be the speaker? Well… I don’t really understand how this game actually works but I should probably do both because I’m heaps better than Alice at Spanish #sorrynotsorry. But really Alice is much more willing to actually use it so far, always prompting conversations with the people we meet in collectivos (multiple person taxis) and whenever we find ourselves waiting for something (usually public transport).

Best food you had in Merida? The tacos from La Reina Itzalana hands down would be my favourite, so fresh and delicious when coupled with the spicy habanero sauce. On a side note the tortas were good and despite what alice says about the first and second tortas from the street stall were somehow different (extra entrails etc.)…they weren’t. Basically a piece of intestine fell out and suddenly, to Alice, it tasted different.